Trampoline parks are relatively new. The first trampoline park was established in Las Vegas, USA in 2004. It took up to 10 years to see the first park open in Europe.

Since 2014, indoor trampoline parks have emerge across Europe and around the world very fast. At the same time, sales of domestic trampolines have exploded, and with them the number of accidents. Between 2006 and 2016, the number of visits to emergencies increased by 18 !

Are trampoline parks dangerous? No, when they are used well. Manufacturers design their parks to limit risks, and they implement strict rules of use for “jumpers”. In a trampoline park, the goal is most often to go from bed to bed, not to bounce as high as possible. The jumping mat is very thin mesh, often black in color, different from those for « sports » trampolines which have a bigger mesh, white in color, and which bounce higher. The lower the height, the less is the risk of injuries. The “black” fabrics, associated with adapted springs, allow a limited jump, a comfortable jump landing, even on the back, and the fiber (mixture of polypropylene and synthetic fiber) is very resistant and lasts for a long time.

However, those black trampoline beds has the inconvenience of being slippery. That’s why parks offer non-slippery socks. With these socks, jumps are therefore more precise, feet better assured and safety is improved.

Most of jumpers are not athletes. They come to relax and have fun. But this activity is new, a trampoline park must therefore propose – or rather impose – rules.

The first of these rules is that 2-person jumping on the same bed is prohibited. Many accidents occur because of the « double » bounce: the first jumper bounces on the bed, the second lands on a bed which is bouncing back up. The shock can be very violent, especially when the first jumper is heavier than the second. Young children’s bones can’t resist it. Trampoline parks are very careful in respecting this rule, and the capacity of the park is calculated according to the number of trampoline beds.

Then, the rest of the rules is a simple question of logic: do not run, do not push or even touch each other during the jumps, do not sit on trampline beds, do not hang on the nets or the basketball hoops… The park manager must constantly check that these rules are respected. The presence of staff is compulsory in an indoor park. The number of supervisors depends on the capacity of the park and the activities offered there. A risk analysis must be done in close collaboration with the manufacturer of the trampolines.

Supervising is essential, vital. Effective supervision ensures a very low accident rate. Accidents often happen in the 5 first minutes, when the excited jumper suddenly jumps off the bed, trips and falls, or in the 5 last minutes, when the exhausted jumper misses his last stunt for lack of strength and precision. Supervisors must be present on the trampoline beds, watch and analyze behaviors, and intervene immediately when necessary.

You may be surprised that there is no applicable European norms in this area. A working group was set up 2 years ago, but discussions are very slow. Only an American norm (F-2970 of 2015) and an Australian norm (AS-5159 of 2018) currently exist in the world, as well as a French experimental norm.

This experimental French norm XP S 52-370 has been divided in 2 parts: the first part concerns manufacture and development of parks, the second part sets the operating requirements. As this norm is experimental, it cannot be made compulsory by ordinance, but it remains a good way to verify that its park provides optimum safety.

This norm also provides key information, as for example the capacity of a park: the XP S52-370 standard gives 1 player for 10 m² on average, and at a minimum 1 supervisor for 32 players, number that might be amended after the risk evaluation. A park with 500 m² of play area could therefore accommodate 50 jumpers with at least 2 supervisors. Experience shows that this capability allows efficient management of players, while allowing a good profitability by rotating players regularly (usually every hour).

The BSI (British Standards Institution) also published in 2017 the PAS 5000, a guide for the manufacture and operations of trampoline parks established with the IATP (International Association of Trampoline Parks), but it is not a norm, and it refers to UK parks. This PAS 5000 is largely based on the American standard F-2970. The capacity calculation is more complicated but the result is however similar to the French experimental norm.

Many European countries are signing a responsability disclaimer, same as in the United States, in case of an accident on a trampoline park occures. If the park owner can be legally covered thanks to this document, he will not be protected from the negative comments on social networks if there are too many accidents.

We recommend showing a video presenting the activity and risks during the game for each jumper before each session. This video has drastically reduced the number of accidents in the parks that implemented it.

To sum it up, a trampoline park does not present more risks than any other leisure activity if it is built according the existing standards and if it is well run, ie: – the design of the park has been considered by a specialist, – that the risks have been researched and assessed, – that the game rules have been established according to these risks, – that these rules are known, understood and accepted by all jumpers before playing, – that the number of supervisors makes it possible to cover all the play areas and particularly the risk areas, – that these supervisors are trained and equipped (specific clothing, whistle, microphone, etc.) – that the structures are controlled and maintained regularly.. 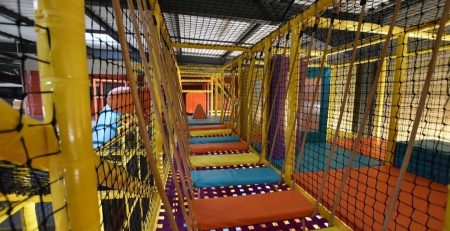 Development of a new complex by your professional trampoline manufacturer Play In Business After a few months of work, the... read more 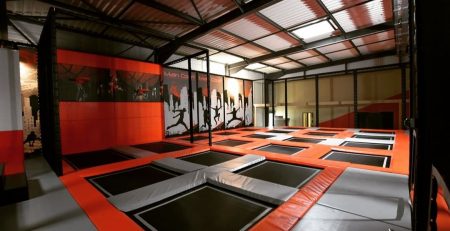 Replacing foam cubes with an Airbag

Replacing the foam cubes of the Cosmic Parc 54 : the advantages of the Airbag for trampolines  Are you the... read more 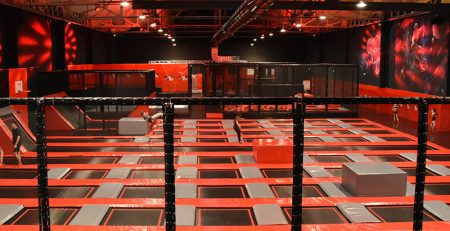 8 steps to open a Trampoline Park 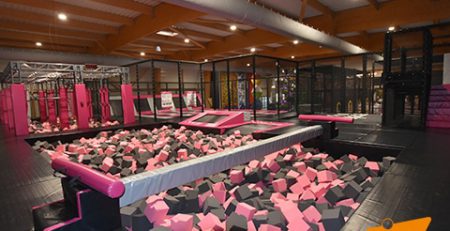 "Fire norms in France are very strict. How to make a foam pit of a trampoline park conform ? France... read more

Replacing foam cubes with an Airbag

Which activity for a top trampoline park?